Rob Lowe has cut quite a path through primetime during the 20-plus years since he joined “The West Wing.”

He turned down “Grey’s Anatomy,” but landed in the ensemble of “Parks and Recreation.” He sold a show about chasing Bigfoot with his sons to A&E Network. From 2003 to 2018 he was also a regular or recurring series “Code Black,” “The Grinder,” “Californication,” “Brothers and Sisters,” “Dr. Vegas” and “The Lyon’s Den.” Then there was the scene-stealing turn as a plastic surgeon in 2013’s “Behind the Candelabra,” and roles in U.K. episodic series productions including 2005’s “Beach Girls,” 2015’s “You, Me and the Apocalypse” and 2019’s “Wild Bill.”

Last year, Lowe landed his biggest hit yet as a TV leading man when he moved into Ryan Murphy’s orbit as the star of Fox’s “9-1-1: Lone Star.” In the spinoff of the procedural about emergency responders, Lowe plays Owen Strand, a New York City firefighter and 9/11 survivor who relocates to Austin, Texas with his son. Lowe’s frontline hero battles lung cancer and many other demons in an action-drama series that blends procedural and serial elements. Led by showrunner/executive producer Tim Minear, “Lone Star” is known for adding the occasional offbeat touches that break the network procedural mode.

“The Ryan Murphy World special sauce is what makes doing a semi-procedural interesting for me as an actor,” Lowe says. “We have all of the elements of the genre, but in this iteration, there are elements of the unexpected. It can be authentic and honest and then become almost absurdist. We do wild tone swings. It keeps it fresh for me.” 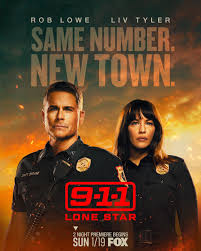 “9-1-1: Lone Star” was tailored for Lowe in the lead role. He appreciates the weight of playing a first responder in the time of COVID-19.

“I think it’s a good thing to spotlight real-life heroes,” Lowe says. “They may not wear masks and capes, but their stories are every bit as compelling. Probably more so.”

One of Lowe’s advantages is his versatility, which means an array of projects come his way.

“I’m lucky enough to be on both lists — the comedy list and the drama list, which is good. It’s good not to be pigeonholed,” he says.

Lowe was a natural from his earliest days in front of the camera. One of his first career breaks was a starring role in the 1980 ABC Afterschool Special titled “A Schoolboy Father.” Lowe played a teenager who becomes a father after hooking up with a girl at summer camp.

In one of the first scenes, a shirtless Lowe is getting ready to go to school, looking in a mirror, combing in his hair and singing along with music coming from a radio. It’s a tricky picture-in-picture scene for an untrained actor to pull off. Lowe nailed it with ease despite his limited experience at the time, Arthur Allan Seidelman, the special’s director, remembers.

“Rob had a vulnerability about him — a very real honest quality that was so appealing,” Seidelman recalls. “He was simple and real and he could convey the essence of what this boy was experiencing.”

Child actors in particular can develop bad habits that stifle their development. Seidelman calls it “Mommy told me to say it this way” syndrome. Lowe was obviously untrained, but it was evident he had the goods.

“It was clear that there was a real engaging, honest talent there that came together in a very attractive package,” Seidelman says.

The against-the-odds trajectory of Lowe’s career is underscored by the tragic fate of his “Schoolboy Father” co-star, Dana Plato. At the time, Plato was a co-star of the hit NBC sitcom “Diff’rent Strokes.” But her career stalled after she left the show. Plato went into a downward spiral of drug abuse and died in 1999 at the age of 34.

Even at the sage of 16, Lowe was “a serious young pro,” Seidelman recalls.

Given that he’s never stopped working, Lowe has no regrets about his decision to pass on what became a career-making role for Patrick Dempsey as surgeon Derek “McDreamy” Shepherd on the Shonda Rhimes juggernaut “Grey’s Anatomy.” He has learned to keep focused on what’s ahead rather than what might have been.

“This is what longevity, experience and recovery give you. There are no accidents,” he says. “Whatever decision you come to, if you come to it from the right place, it’s never wrong.”

Moreover, Lowe’s not convinced he was right for the show. “Me in that part isn’t as interesting as Patrick in that part,” he says. “If it’d been me (the fans) wouldn’t have called me ‘McDreamy,’ they would have called me Rob Lowe.”

But most important, the “nay” to “Grey’s Anatomy” put Lowe in the position to show off his comedy chops as the neurotically optimistic small-town city official Chris Traeger in NBC’s much-lauded comedy “Parks and Recreation.”

“Had I done ‘Grey’s,’ I wouldn’t have been in ‘Parks and Recreation.’ That alone for me is enough,” he says.

Lowe’s most unusual TV role was one he created for himself and his adult sons, Matthew and Johnowen. A&E Network had approached the elder Lowe about hosting a show about home renovation and flipping. In a meeting with A+E Networks executive Rob Sharenow at the Disney commissary in Burbank, Lowe advanced a very different agenda.

The result was 2017’s “The Lowe Files,” an unscripted series that was party buddy comedy, part road trip and partly devoted to the Lowe trio investigating reports of paranormal phenomena in odd corners of the country. The concept “combined two of my favorite shows: Anthony Bourdain and ‘Scooby-Doo,’ ” Lowe says.

“The Lowe Files” reflected the whimsy and wonder that Lowe tried to share with his sons as they grew up. The series ran eight episodes. For sure, one of those hours was focused on the hunt for Sasquatch, who had a history with Matthew and Johnowen.

“I rented a Bigfoot costume from Western Costume once and ran around in the woods in it when we were on a camping trip,” Rob Lowe says. “That’s what it was like to grow up in the Lowe household.”

In fact it was Lowe’s desire to be present in the lives of his children during their childhood years that helped spur him to embrace steady TV work that kept him from having to be on movie sets in far-flung locations for most of the year.

“I was able to coach Little League. It was a joyous luxury,” Lowe says.

Lowe has branched out into other pursuits over the years, but acting remains his core passion.

“Acting is about being understood. It’s about finding the moments — without being too hifalutin’ — where people can recognize the human condition,” he says. “That can be as silly as ‘The Grinder’ or ‘The Lowe Files’ or something more straightforward like ‘9-1-1: Lone Star” with themes of sacrifice, service and loss. That’s what I like about acting.”

We use cookies on our website to give you the most relevant experience by remembering your preferences and repeat visits. By clicking “Accept”, you consent to the use of ALL the cookies.
Cookie settingsACCEPT
Manage consent

This website uses cookies to improve your experience while you navigate through the website. Out of these, the cookies that are categorized as necessary are stored on your browser as they are essential for the working of basic functionalities of the website. We also use third-party cookies that help us analyze and understand how you use this website. These cookies will be stored in your browser only with your consent. You also have the option to opt-out of these cookies. But opting out of some of these cookies may affect your browsing experience.
Necessary Always Enabled

Any cookies that may not be particularly necessary for the website to function and is used specifically to collect user personal data via analytics, ads, other embedded contents are termed as non-necessary cookies. It is mandatory to procure user consent prior to running these cookies on your website.